This project reintroduces fragments of lost and re-imagined local buildings into their sites. The follies are monumental, robust, and beautifully crafted. They suggest the past while affording imaginative and playful new ways of reading and inhabiting the public realm distinctively differently from other local parks.

Large-scale erasure, reconnection, rebuilding, and removal have defined this site for the last century. These designs address the implications of these radical changes- of memory and forgetting in material terms. 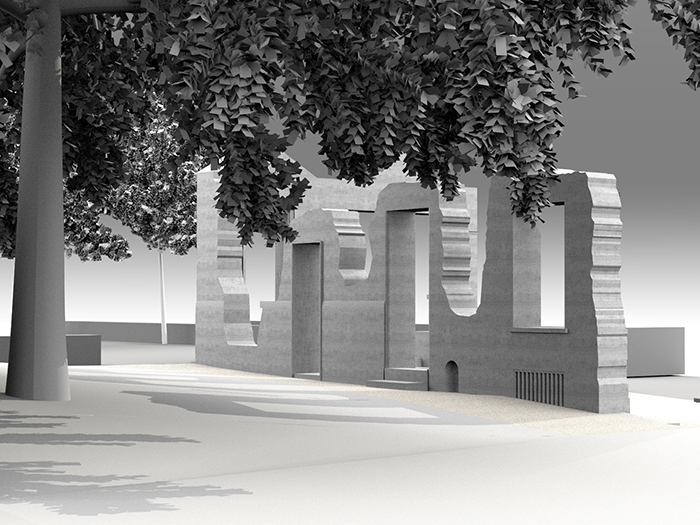 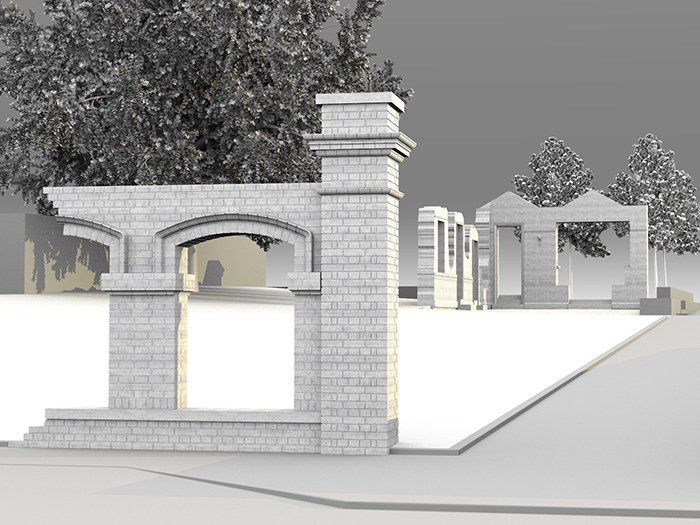 The three follies completed in Phase 1 were cast from silicone  moulds taken from a 19th century wall that was demolished to make way for Phase 2. Those follies were made from Jesmonite- a thin material similar to fibreglass- suppoted with an internal steel frame. In contrast, the follies in Phase 2 will be cast in situ in a pale concrete using purpose-made timber formwork.

These proposals have evolved from detailed site and archival research and consideration of the area’s recent history in terms of use, scale and materials. In the last 100 years parts of David Street have been opened, closed, reopened and pedestrianised; Jacob Street has been cut off from Temple Way; Hawkins Street was built; and the fortunes of Old Market have declined. Much of the local area was destroyed in the Second World War, and optimistic post-war planning- in particular, the construction of the Old Market Flyover road scheme in the late 1960s- problematically reshaped local pedestrian and vehicular routes.

The site’s new public realm is intended to contribute to the regeneration of the local area. It will allow for vehicle access while prioritising pedestrian use; reconnect Jacob Street with Temple Way for pedestrians, and open up a new public park between Unity Street and Jacob Street. The materials will be appropriate for their context, and will be both robust and finely crafted in order to add detail and material richness to the area. The art commission and approach to the landscaping have been considered together, and are fully integrated. 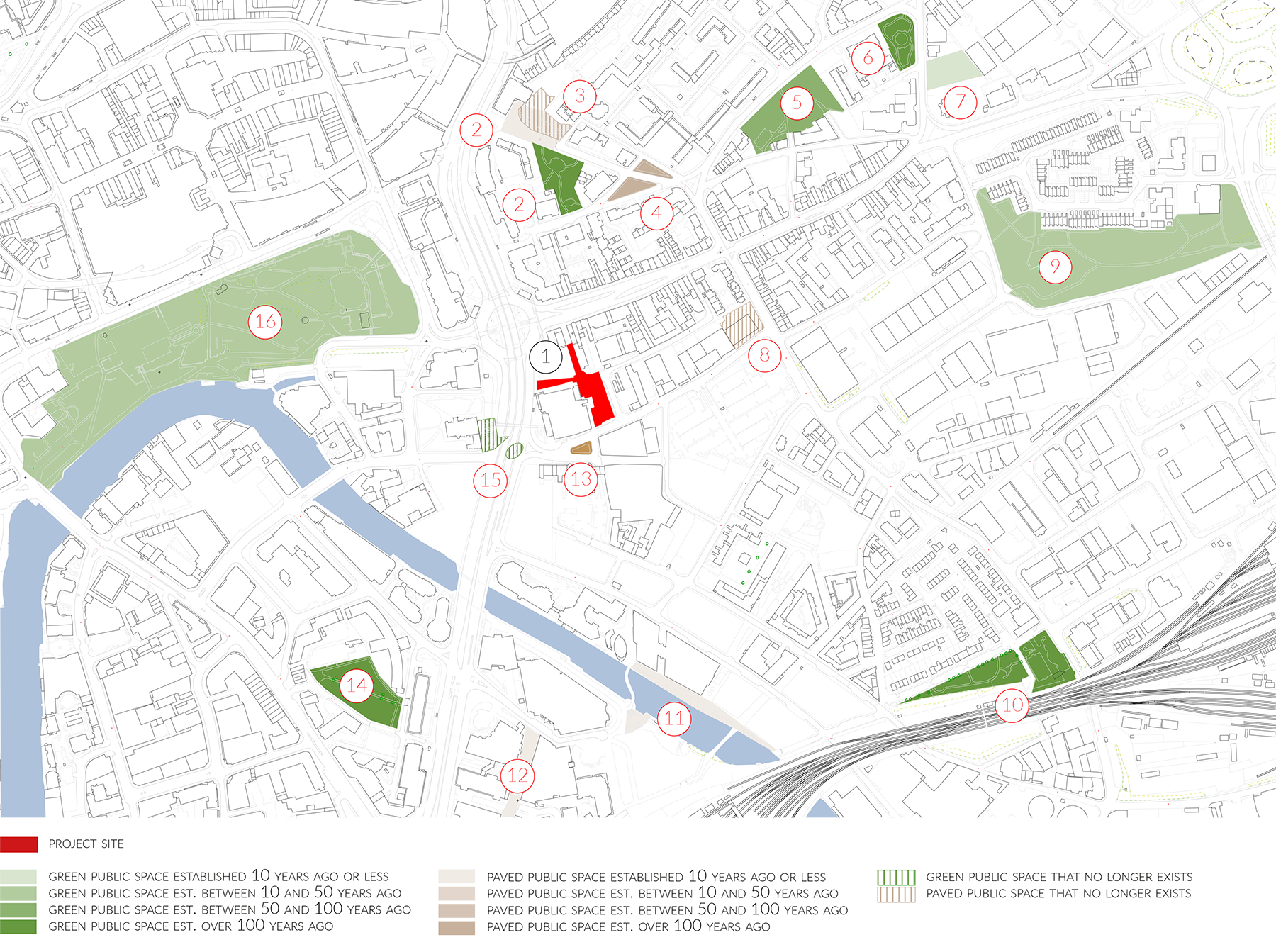 On being given my brief for the project in 2016, I produced a survey of public space within a five minute walk of my site. I found that the majority of the green spaces were similar, characterised by extensive mown lawns and informal tree planting. This is a generic, low-maintenance format that is the familiar default for most English civic parks. Although these give an impression of being remnants of countryside enclosed by the city as it grew, in fact several of them were very recently constructed. For example, despite Castle Park’s  apparent timelessness, it was actually completed at the end of the 1970s, and erased the historic medieval street patterns and numerous individual cleared WW2 bomb sites in order to establish one large, mostly undifferentiated open space. My designs for the new Unity St park attempt to resist this ‘tabula rasa’ approach, instead incorporating reimagined building fragments from the urban site’s recent past.

From the intimacy of the eye-level detail to the scale of the site within its wider context, the follies intend to sensitively define their specific sense of place. 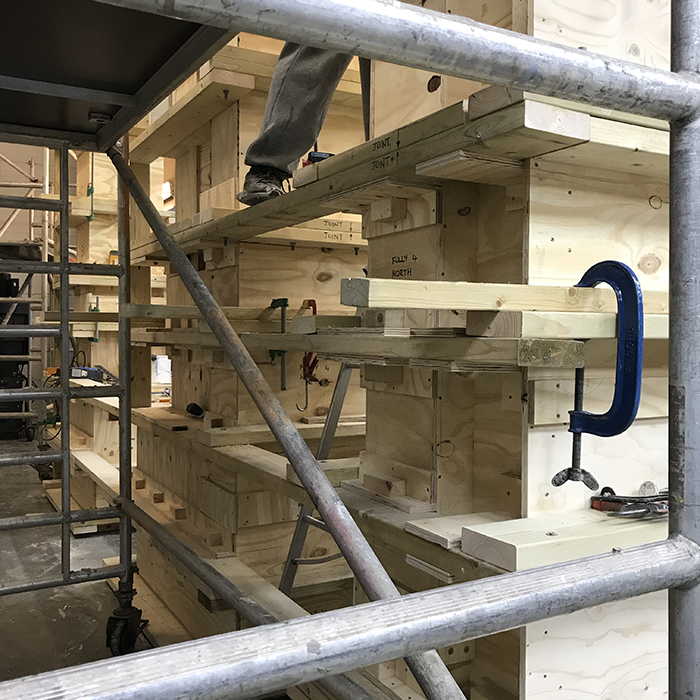 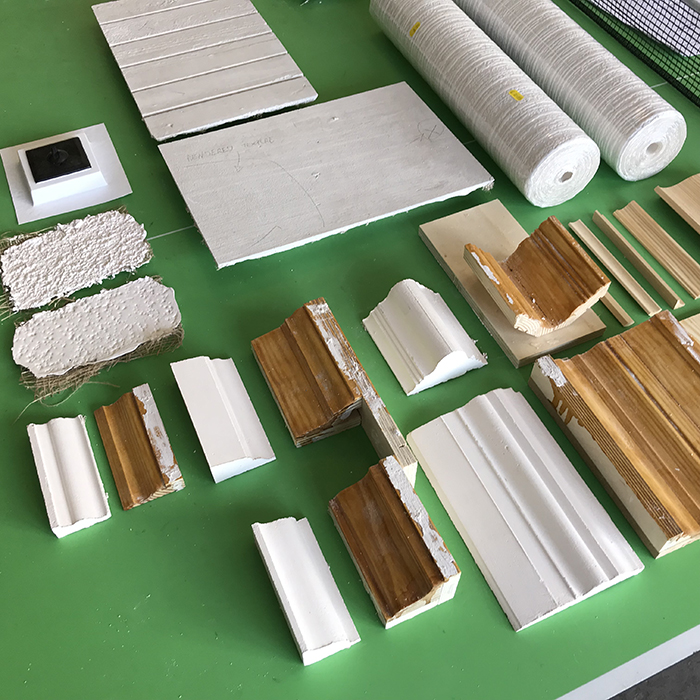 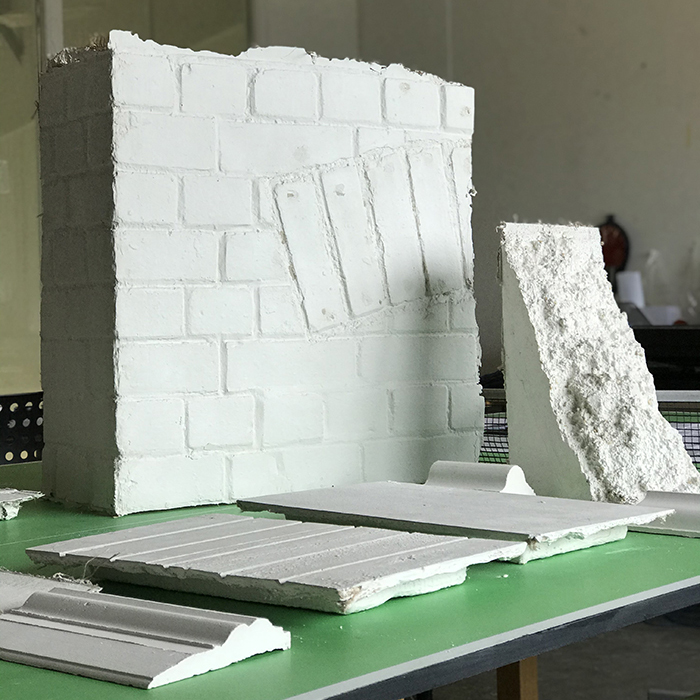 Windsor Workshop are fabricating the follies. Numerous test casts have been produced in preparation for constructing the full-sized formwork, including testing the wallpaper that will be used for the interior walls of Folly 4 and multiple iterations cast from standard timber mouldings to create inverse details.