This project reintroduces fragments of lost and re-imagined local buildings into both the layout of the site’s landscaping and as a number of follies located across the Print Hall and Unity Street sites. The follies will be monumental, robust, and beautifully crafted. They will suggest the past while affording imaginative and playful new ways of reading and inhabiting the public realm that will be distinctively different from most other local parks.

These proposals have evolved from detailed site and archival research and consideration of the area’s recent history in terms of use, scale and materials. In the last 100 years parts of David Street have been opened, closed, reopened and pedestrianised; Jacob Street has been cut off from Temple Way; Hawkins Street was built; and the fortunes of Old Market have declined. Much of the local area was destroyed in the Second World War, and optimistic post-war planning- in particular, the construction of the Old Market Flyover road scheme in the late 1960s- problematically reshaped local pedestrian and vehicular routes.

The site’s new public realm is intended to contribute to the regeneration of the local area. It will allow for vehicle access while prioritising pedestrian use; reconnect Jacob Street with Temple Way for pedestrians, and open up a new public park between Unity Street and Jacob Street. The materials will be appropriate for their context, and will be both robust and finely crafted in order to add detail and material richness to the area. The art commission and approach to the landscaping have been considered together, and are fully integrated.

Large-scale erasure, reconnection, rebuilding, and removal have defined this site for the last century. These designs address the implications of these radical changes- of memory and forgetting in material terms. From the intimacy of the eye-level detail to the scale of the site within its wider context, they intend to sensitively define its specific sense of place. 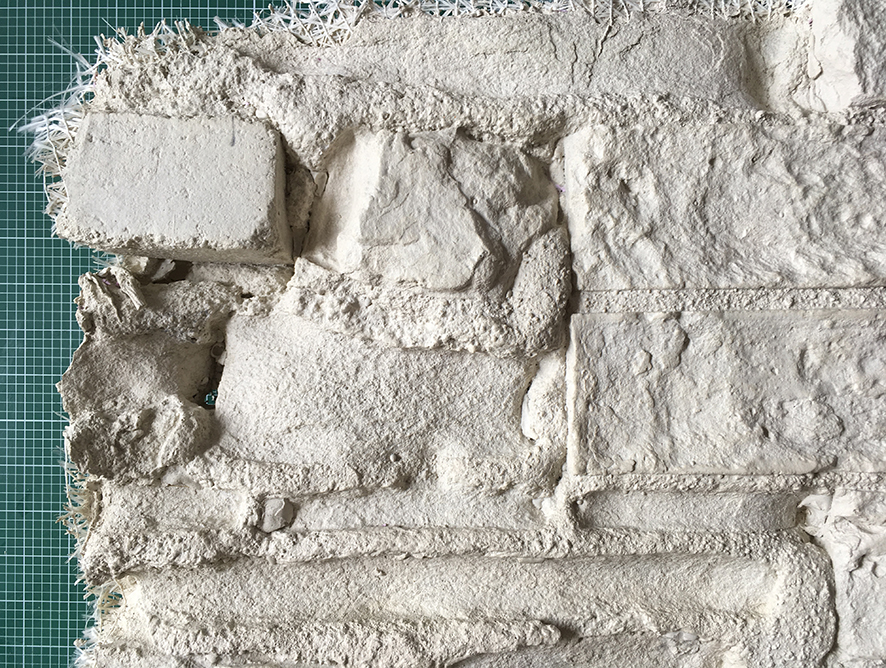 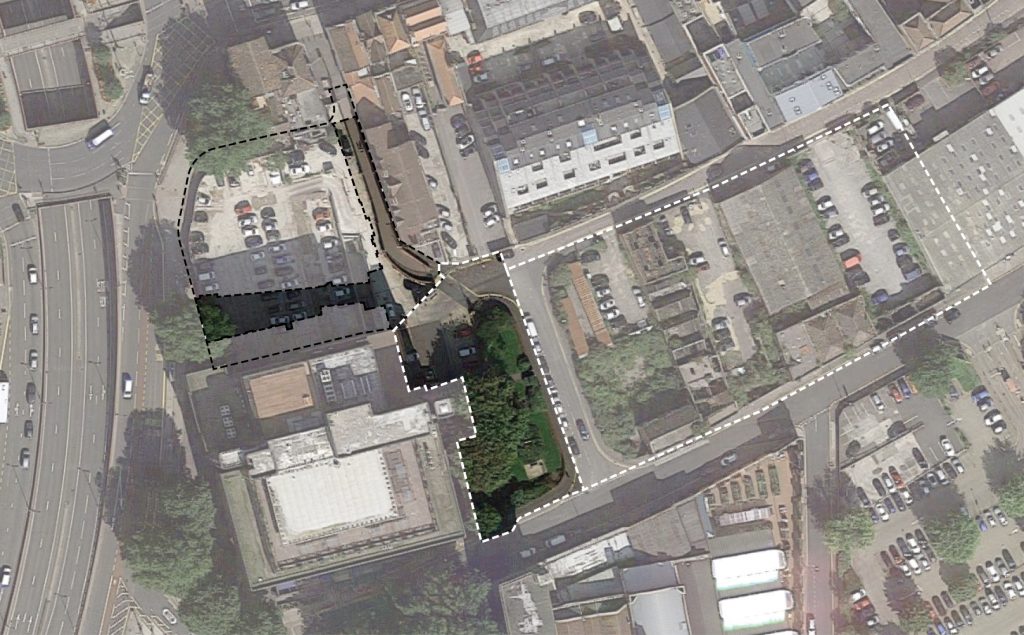 The Print Hall site, outlined in black above, is just South of Old Market in Bristol city centre. It is adjacent to the Unity Street development, outlined in white. My designs for the public realm for both sites were developed simultaneously. Print Hall will be completed in August 2017, and work will begin on Unity Street in the autumn of 2017. 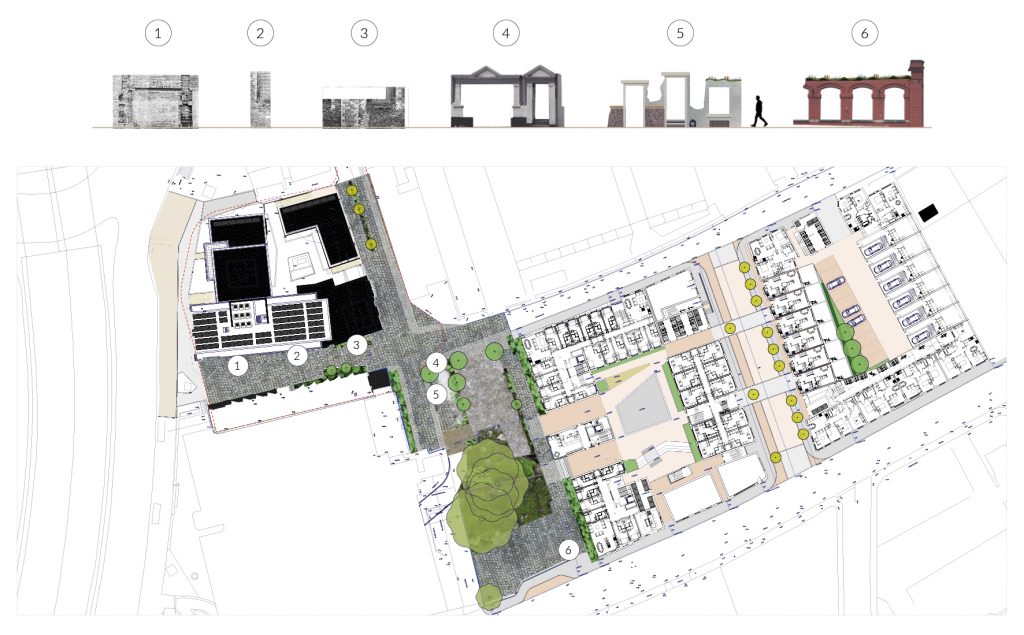 My designs for the public realm for both Print Hall and Unity Street involve creating six follies based on fragments of local architecture, and the lay-out of a new park. 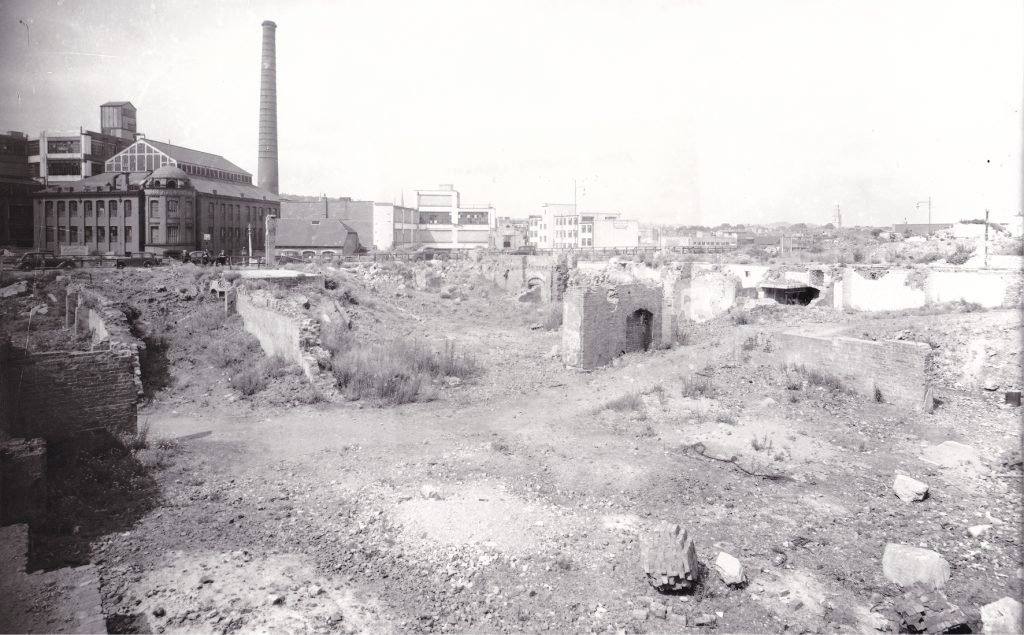 My research into the Print Hall and Unity Street sites revealed the extent to which they had undergone radical change during the last 100 years. Cleared city-centre bomb sites such as this one were often used as informal playgrounds and community gardens before being redeveloped, and as such offered substantially more extensive (though temporary and informal) public space in city centres than had ever previously existed. Fragments of basement walls and fireplaces are surrounded by wild plants, and variations in the ground level divide the landscape into a varied terrain. Despite their apparent timelessness, the site's contemporary local parks have erased their historic street patterns in order to establish undifferentiated green open space. In response to this, what might a local park look like that took its historic landscape into account? (Photograph: Bomb Damage, Castle Street Area, c1946. Bristol Reference Library Collection)

Several derelict structures will be demolished as part of the Print Hall and Unity Street developments, including this ruined wall enclosing the site's temporary car park. The condemned wall includes richly weathered surfaces in two local materials: red brick and pennant stone, and features traces of elements such as doorways, windows and buttresses. 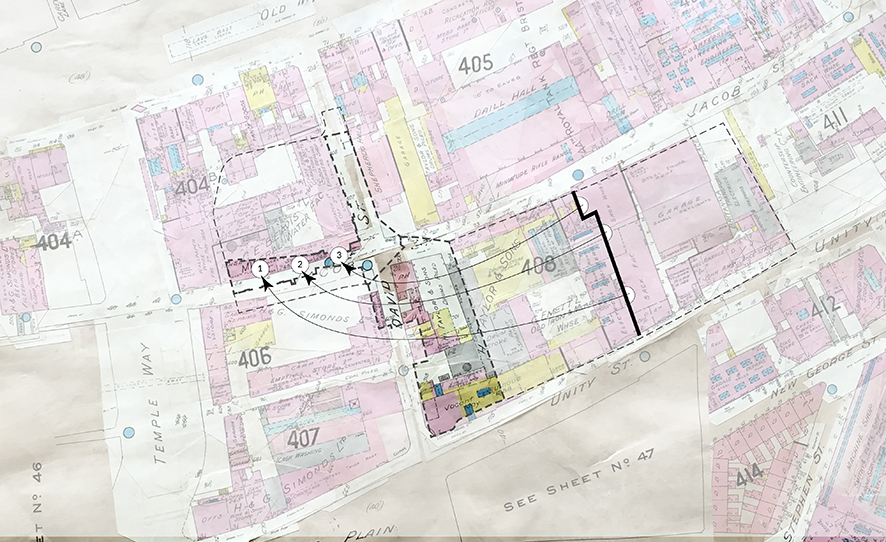 The follies for Print Hall will be cast from moulds taken from this wall in order to translate fragments of the site's historic grain into three contemporary structures. (Insurance map, c1957. Bristol Reference Library Collection)

Details of the condemned wall, showing the rich texture of weathering and erosion of its brick, pennant and mortar fabric

Studies of the structure's elevations

1:50 model of the structure

1:50 model of the structure as a volume

selecting the parts to be cast for the three follies 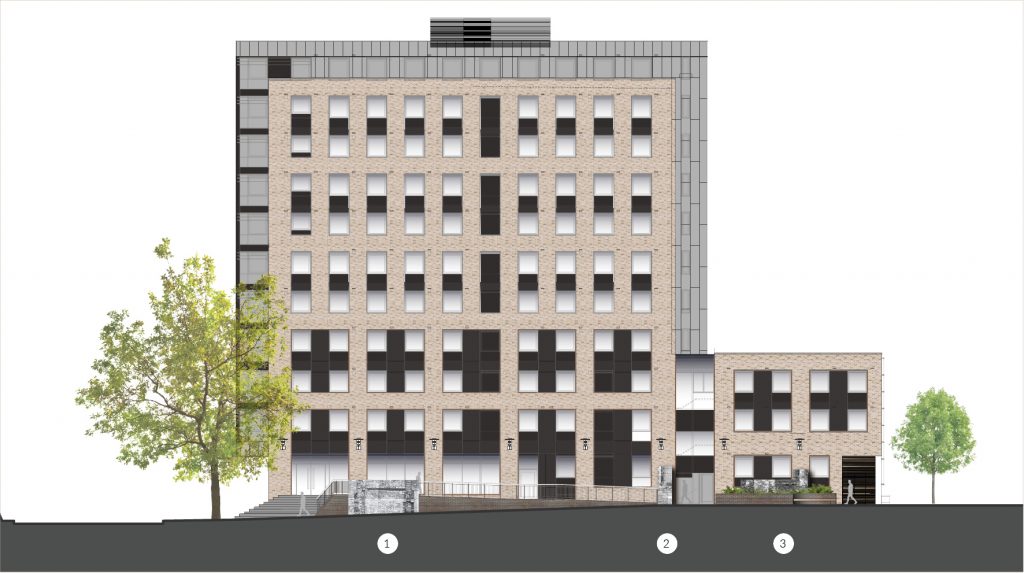 The three follies in relation to the new Print Hall development, created from cast sections of the neighbouring old wall that is due to be demolished. The casts transform fragments of the old into a playful, evocative new terrain from which the new building appears to rise. The follies' white cast brick surfaces will correspond with the buff and blue brindled bricks used in new building's construction.

Details of the three follies in relation to the new building's elevations.

1:50 model of folly 2, showing three of its four elevations. The front and back elevations will be cast from moulds taken from the condemned wall, and the two side elevations are plain 'sliced' sides.

making a silicone rubber mould for a sample panel, February 2017 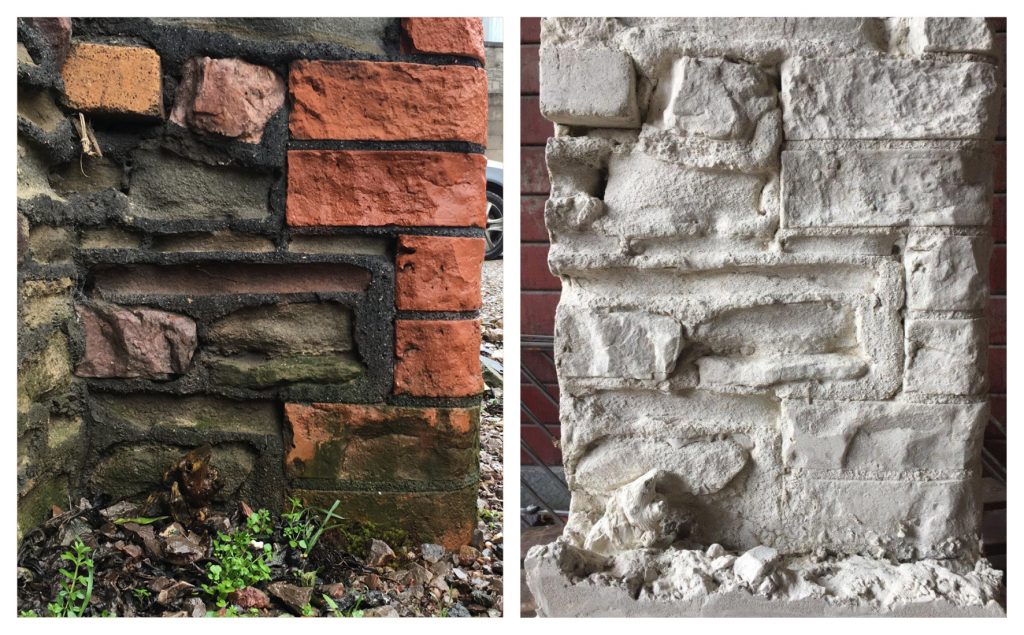 Full-scale silicone rubber moulds being made on site, March 2017

Silicone rubber mould for folly 2 being prepared in MDM Props' workshop, May 2017

Silicone rubber mould being prepared for casting in MDM Props' workshop, May 2017. This project is due to be completed in August 2017.