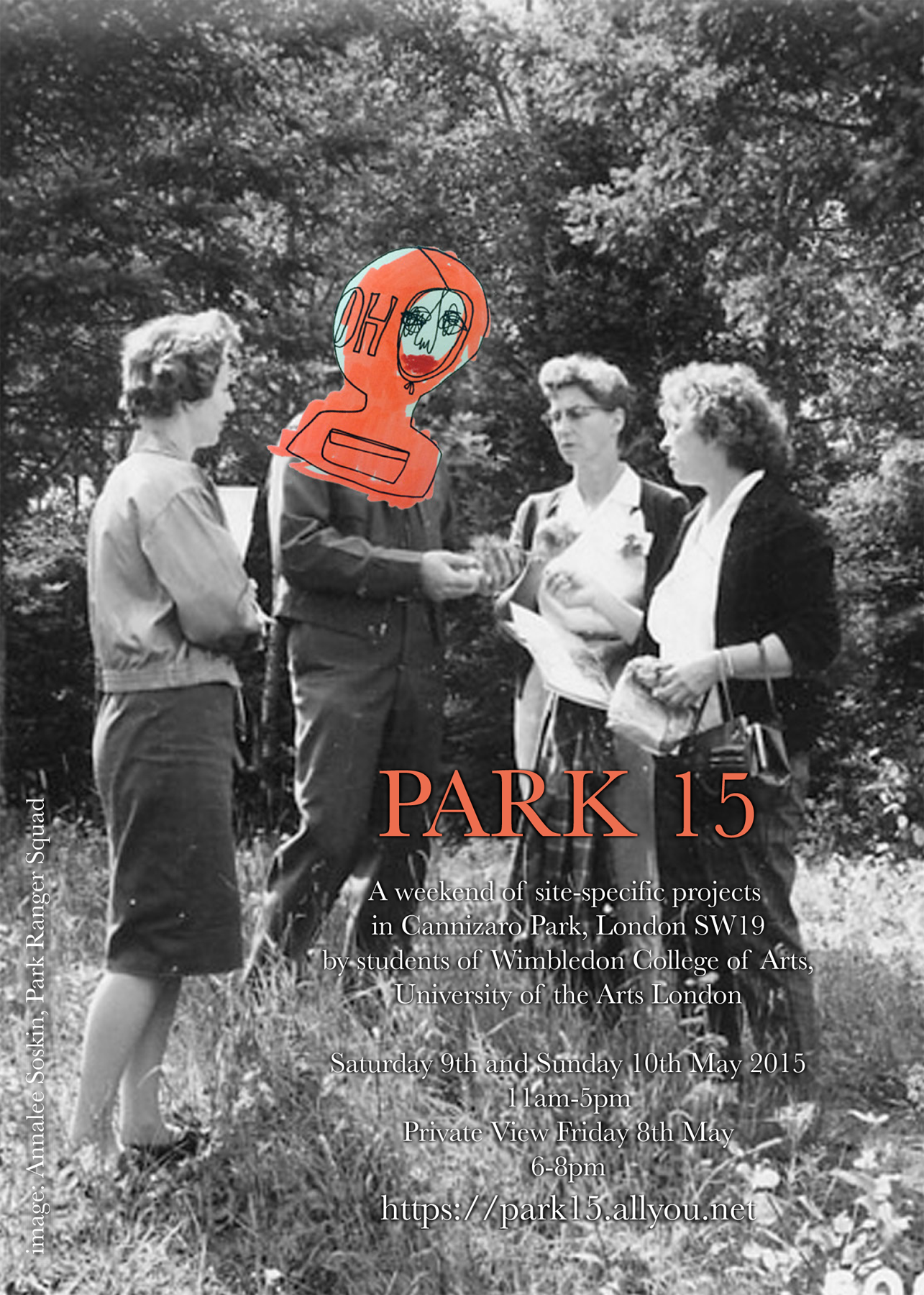 I curated PARK 15, a weekend of site-specific projects for Cannizaro Park by students of Wimbledon College of Art, 9th-10th May 2015.

Text from my press release:

Cannizaro Park was originally a garden, but became a public space when Merton Council took ownership in 1949. This originally private place has become a much-loved civic amenity, protected by regular maintenance and established codes of behavior. Many of this year’s artists take the nature of the Park’s ‘civic amenity’ as their starting point. FLAC Group tests the shared codes of behavior that define public and private space with their RULES AND REGULATIONS, a new set of signs that are introduced into the Park in advance of the show. Closely resembling Merton’s own signage, their signs invite new habits to become established by the time PARK 15 opens. Annalee Soskin employs fellow artists and volunteers within her PARK RANGER SQUAD. On site throughout the weekend, members wear a highly visible uniform of pink utility hoods and are available to assist visitors and to take on park-related tasks. Ben Edmunds’ KICKABOUT celebrates the informality of a park football game while bending its rules by multiplying the number of balls in play. Siobhan Beaton pays homage to the coming of summer by erecting a maypole on the park’s main lawn. A traditional seasonal feature of civic spaces throughout England, her maypole hosts a lascivious dance of the kind that originally characterized Mayday festivities. Liz Morison’s GATEKEEPER opens the Park’s huge cast iron gates for each visitor as they arrive. The gates are always kept open during the day so she has no formal authority to do this, but as a polite, trusted, older woman will anyone even notice her at all?

Several artists address the relationship between nature and artificiality that is always in tension within the Park. Rosie Munro Kerr works with daylight to produce artificial light; SOLAR-TECHNIK presents the technology to translate one into the other. Jon Clair and Mark Goldby transform the two belvederes in the Herb Garden into reciprocating viewing devices. One becomes a Camera Obscura, within which the image of the surrounding garden appears as if by magic. Akihiro Yamaguchi’s YOUR FILTER is a device that produces an area of soapy film through which to view the lawn. The effect is beguiling and fleeting. Charlie Mae Bloom scripts a performance for a set of anthropomorphic characters- the ‘Ground-based Council’- that contemplate and discuss their nature as plants. Naomi Avsec invites the Park’s birds to feast on EAT ME TREE SPIRITS, a collection of portraits rendered in fats and seeds of imaginary beings that inhabit an ancient tree. Cannizaro is a site for collective memory, and contains several notable memorials. Susan Walker presents her own interpretation of a memorial in the form of an immersive sound collage which evokes histories, memories and fictions relating to the site. With HOME SWEET HOME Rebecca Brennan’s stack of discarded mattresses becomes a monument to conflict, loss and homelessness. Dave Lok Chung Ho’s THE KNOWLEDGE BETWEEN GOOD AND EVIL takes the familiar form of a newly-planted apple tree and memorial bench, while inviting a broader contemplation of the significance of the tree and the nature and meaning of an artwork.

Wimbledon College of Arts would like to thank Merton Council for their generous support and assistance again this year.