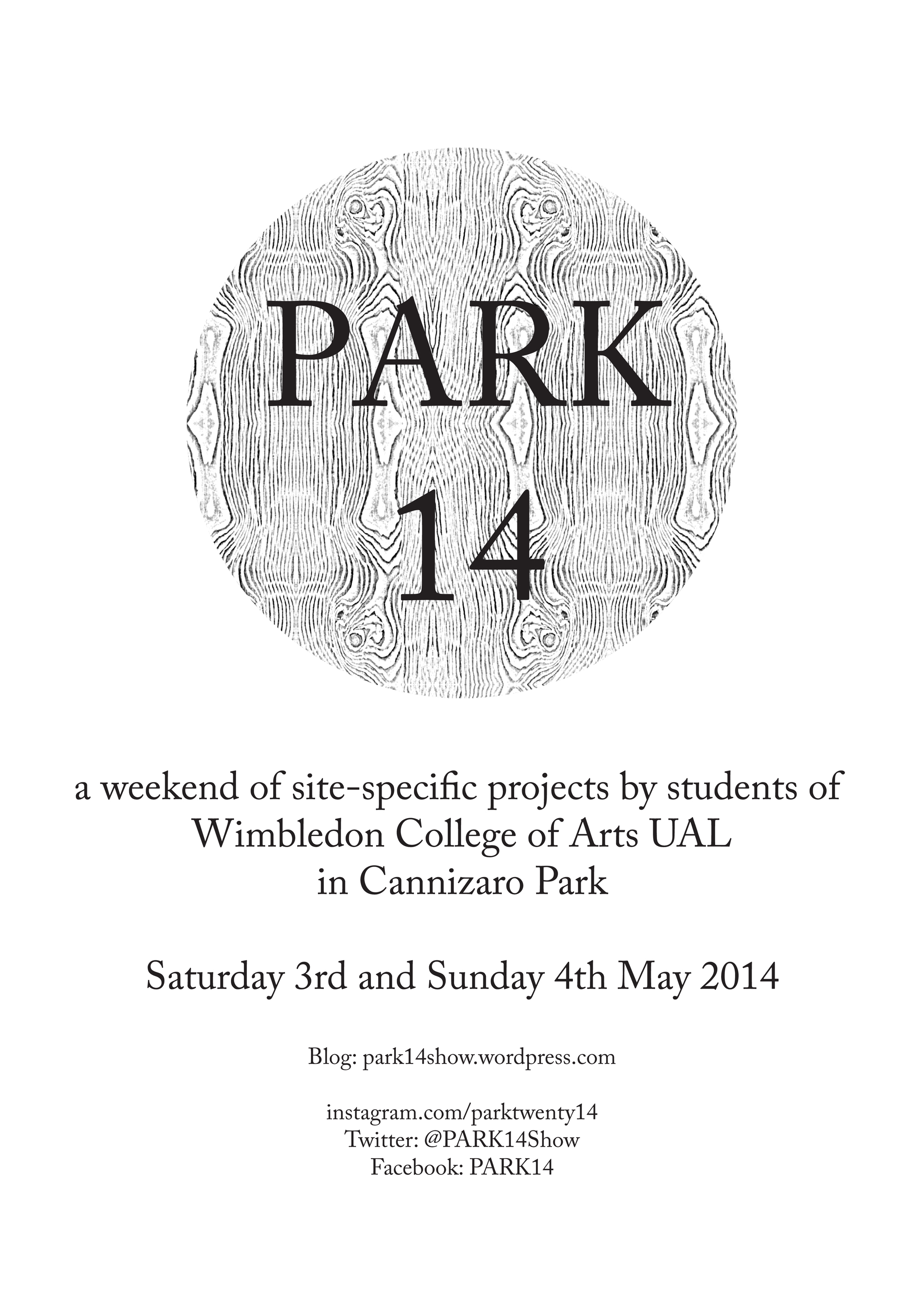 PARK 14: A weekend of site-specific projects in Cannizaro Park, London SW19 by students of Wimbledon College of Arts, Saturday 3rd and Sunday 4th May 2014.

PARK 14 was curated by Juliet Haysom

Wimbledon College of Art, University of the Arts London

PARK is an annual event which has been hosted by Wimbledon College of Arts in Cannizaro Park since the 1970s. It offers students the opportunity to work site-specifically within the varied landscape of the park, and to develop their work within the context of a group show. The projects within PARK 14 are typically diverse in their materials, intension and their scale, with artists working with sound, found objects, performance, sculpture, map-making, drawing and painting. As well as engaging with a diverse range of sites within the park, this year’s projects also extend beyond the boundaries of Cannizaro and invite visitors into related territories on the fringes of the park and within the digital realm.

Cannizaro, like so many English parks, took elements of its design from formal Italian gardens and most of its characteristic planting from specimens gathered from around the globe. This paradox- of a national character defined by its appropriation of others- forms the basis for several artists’ work. Rosie Munro Kerr has made memorial plaques for several of the park’s non-native trees. Manufactured by Sussex-based Bulmer Brick and Tile from London clay and typeset in Caslon, one of the oldest English typefaces, her work investigates the nature of naturalisation. Natasha Sabatni’s satyrical placards refer to concerns about native species, and pose questions about their protection and the status of the species by which they are being replaced. Sean Mullan’s Ellohell evinces a natural response by artificial means. Its canned laughter, taken from American editing software, sounds both familiar and unnatural within the soundscape of the park.

The nature of the authentic object is examined by many of this year’s artists. Liv Preston, Cuthbert Nobel, Benjamin Dawton and Georgia Dennison are working together to make P_T, an experimental site which functions both as a place for making and as a context for discussions. On Sunday afternoon P_T will host a sculpture forum, in which invited specialists will discuss the nature of their crafts. Miroslav Pomichal applies a traditional colour palette and gestural woodcarving techniques to generic timber elements in order to define and produce an authentic, crafted object. The relationship between real and artificial objects is investigated by Charlie Mae Bloom’s Reality Glitch. A variety of readymade artificial rocks, flora and fauna have been subtly inserted into the park to both enhance and undermine its appearance of naturalness. The uncanny

movement of Equilibrum, Georgia Brown’s modified tree, warns of impending catastrophe within the natural world. With Archaeological Dig, Rachel Mathewson’s sets up the fiction of a mysterious past. Tahira Mandarino employs similarly theatrical means; her arrangement of fresh washing outside the park’s empty, derelict house suggest a narrative in which it is currently occupied.

Occupation of territory comes under scrutiny by Rebecca Brennan. By constructing a facsimile of a wall from a UNHCR camp on the Syrian border, she closes off a section of the park from public access and invites consideration of the luxury of unrestricted movement that this shared space provides. Robert Mckenzie’s Nothing Space similarly encloses a volume within the park, and as an artist he makes a privileged claim for its ownership. Janine Hall’s Open 24/7 resists any kind of occupation as its frameless, pivoting gate draws an endless circle on the grass. In contrast, Holly Eaton, Jordan Sherman and Matthew Bradleys’ structures invite occupation. Their tinted and reflective surfaces alter and distort the appearance of those inside and the wider park beyond. Naya Eleftheriou invites visitors to exchange a photograph of their view within the park with one of her own. These photographs will become part of an online archive within a shared, digital space.

Andrew Wallis and Midori Fullerton’s project examines the relationship between time, memory, and place, and invites visitors to take a walk outside of Cannizaro and to certain points within the park while accompanied by their audio work. Elizabeth Jardine’s project proposes the Artist as Explorer, and considers the role of artists within 19th century expeditions in contrast to their role today. Time allocated for work and leisure become indistinguishable as the PARK weekend is spent immersed in the private activity of making drawings and recordings of her observations. Jay Delves employes runners to measure the weekend’s duration more precisely, using a course plotted between each of the works in this year’s show and timed to the hundredth of a second.

Finally, at the end of this year’s show, Ellie Wadman’s fictitious company EW will award the EW Prize. Using criteria from her Founder’s Statement and PARK’s own selection process, the EW Prize examines art’s relationship with sponsorship and questions the value of such awards.

Wimbledon College of Arts would like to thank Merton Council for their generous support and assistance again this year.